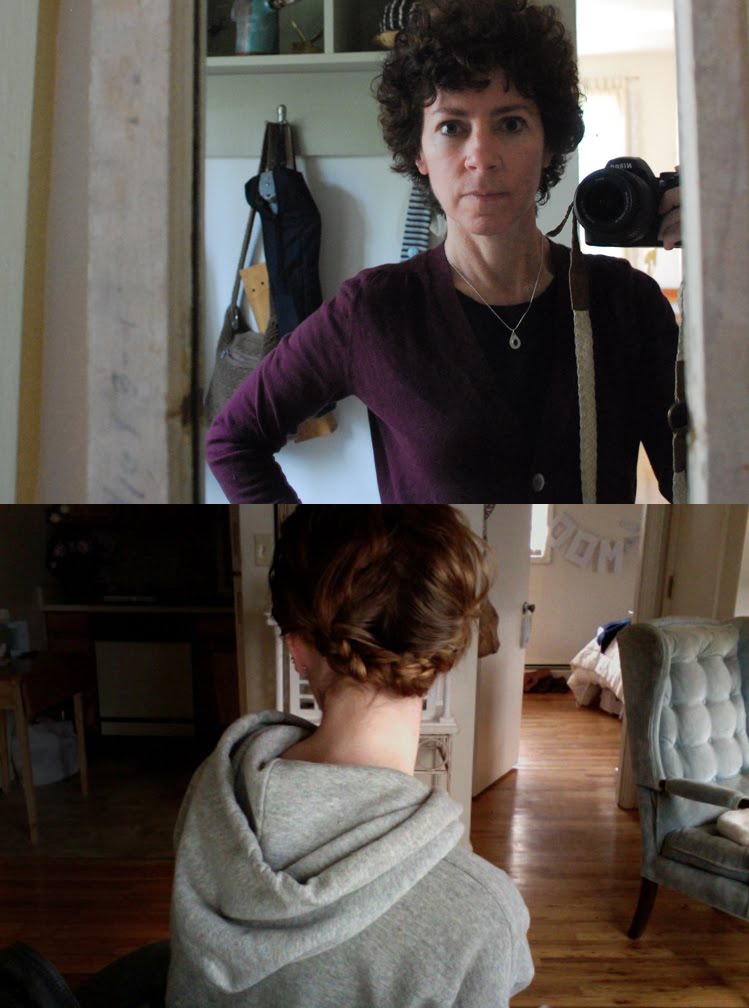 L - Nikon / T - ipod
"Accept what you cannot change. "
- from the 54 precious keys to happiness list in "Choosing Happiness" by Alexandra Stoddard
Posted by spread your wings at 5:36 PM 7 comments: 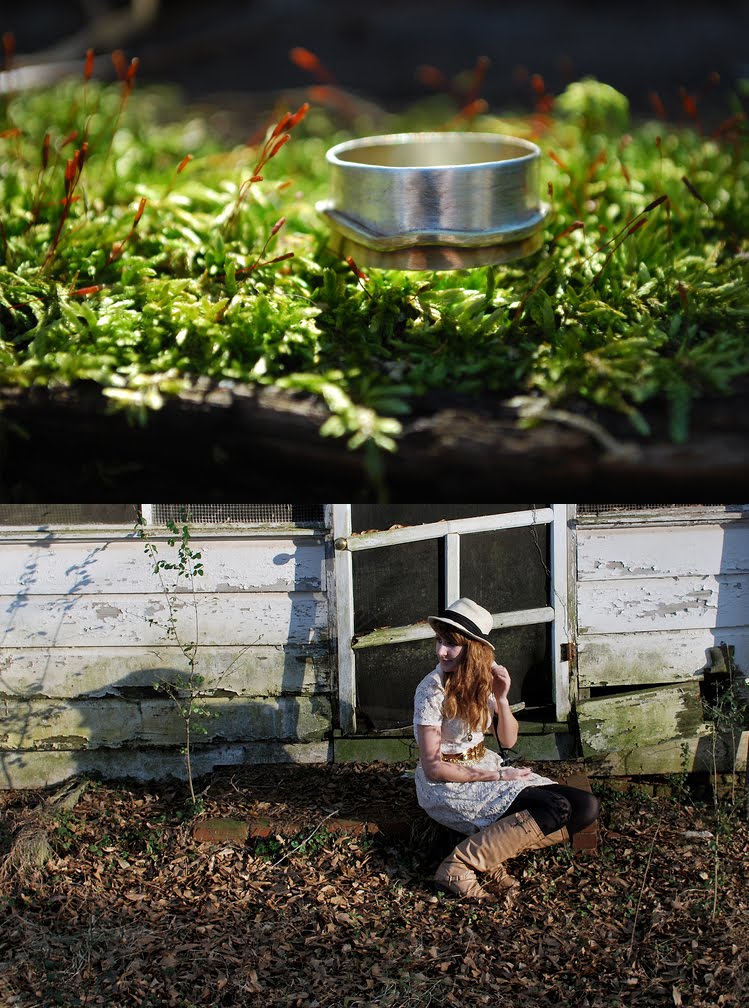 L - Nikon / T - Nikon
"Express your unique creative spirit."
This is one of the keys to happiness. * Lately I have been expressing my creative spirit with new ring designs inspired by nature. This one is inspired by the gently-flowing creek I hike beside on the weekends at Big Trees Forest. / I believe Taylor expresses herself creatively partly through the clothes she chooses to wear. Putting items from thrift stores together in such a unique way. I love it.
/ the weather was perfect this past weekend and that was a very nice birthday surprise [: so on sunday we decided to take advantage of it and go visit our tried and true abandoned house. we hadn't been back for over a year and it seemed like the perfect opportunity. everything was mostly as we had left it – there was something comforting about that. something very settling about the presence of something that hadn't changed in over a year when i know that i definitely have changed from year 20 to 21. this week we've had such warm temperature which makes me a little sad since i have so much studying to do. i would much rather be outside enjoying the sun! but spring will come soon and i'll get my chance.
*I found a book at the Goodwill store titled "Choosing Happiness" by Alexandra Stoddard. I just picked it up by chance and started flipping through because I saw highlighted quotes that I thought would be good for the heart garland I was making for Taylor. So I bought it. Later I found at the back of the book was a list of 54 keys to happiness. I liked them so much I decided to keep the book intact and to copy the key phrases in order to create 54 hearts - each one having one key to happiness - one a week for a year. Georgia B. suggested I do a series using the 54 Precious Keys to Happiness. I think that is a good idea. do you?
Posted by spread your wings at 6:15 PM 6 comments: 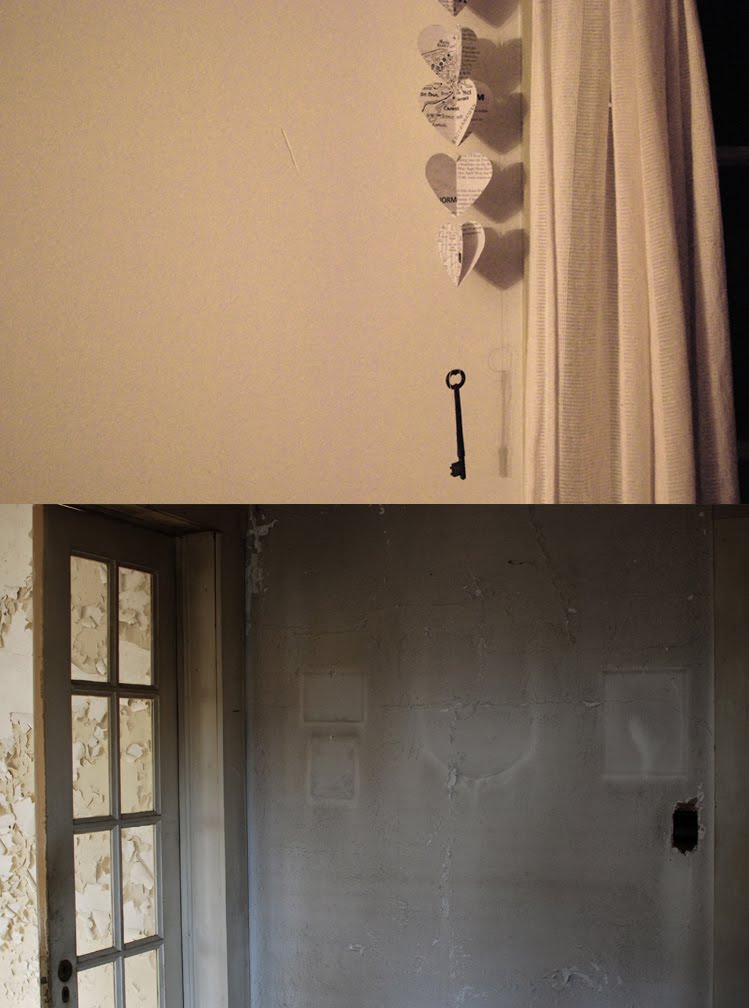 L - Nikon / T - Nikon
“Beauty is the mystery which enchants us...beauty is dynamic.” -Rollo May
Posted by spread your wings at 7:01 PM 7 comments: 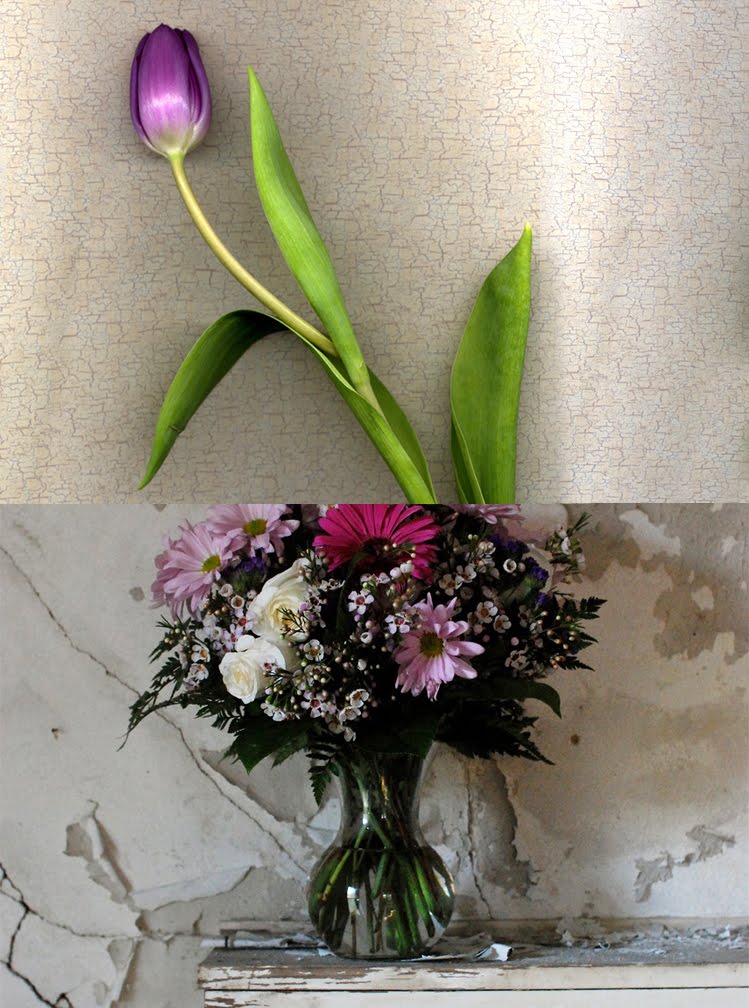 L - Scannograpy / T - Nikon
"Whether people are fully conscious of this or not, they actually derive countenance and sustenance from the “atmosphere” of the things they live in and with. "
- Frank Lloyd Wright
Crazy synchronicity tonight.
A friend gave me these pretty purple tulips for Valentine's Day and when I got home tonight I noticed one of the flowers was bent. So instead of just throwing it away I decided to scan it for my scannography collection. I used some cracked textured paper for contrast. I love the grace this single flower has.
Taylor sent me a bunch of photos tonight from an abandoned house she had explored. To my amazement several of the photos where of the flowers I had given her for her birthday. I'm assuming she thought the contrast would be interesting. Or maybe she had seen the heart garland message I made that said "Realize that flowers create Paradise on earth." - one of the "54 Precious Keys to Happiness" I had found in an old book that I got at a Goodwill store. The author of the book suggested that to have flowers around the home bringing us happiness. I think that perhaps it does, don't you?
Posted by spread your wings at 5:21 PM 7 comments: 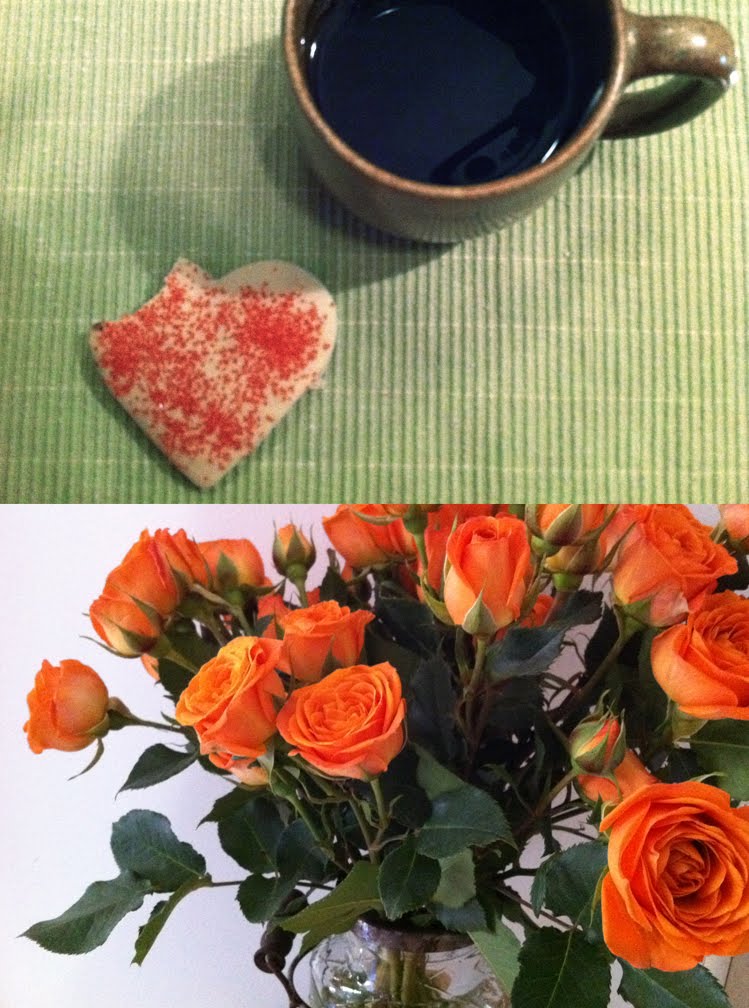 L - solo post, iphone
I hope your day was filled with all that you love and special people to share it with.
Posted by spread your wings at 9:40 PM 4 comments:

baby girl / all grown up 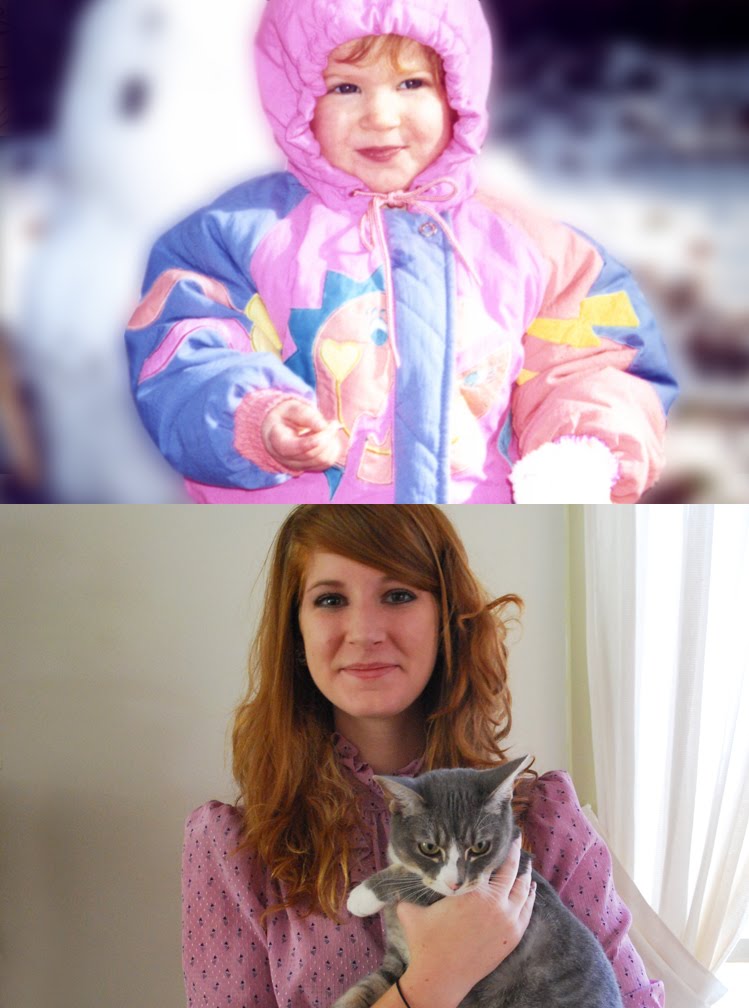 solo post - L
Happy 21st Birthday Taylor!
Here you are today,  all grown up and so lovely too. Such a warm and gentle person,  so special in every way.  Your childhood sparkle and charm still shines through today.
My wish for you, on this very special day, is that all the dreams you hold within your heart  come true and bring you happiness from which you'll never part.
She is still every bit the light in my life as she was the minute she was born. It's hard to believe my baby girl is now an "adult".
Posted by spread your wings at 9:09 PM 5 comments: 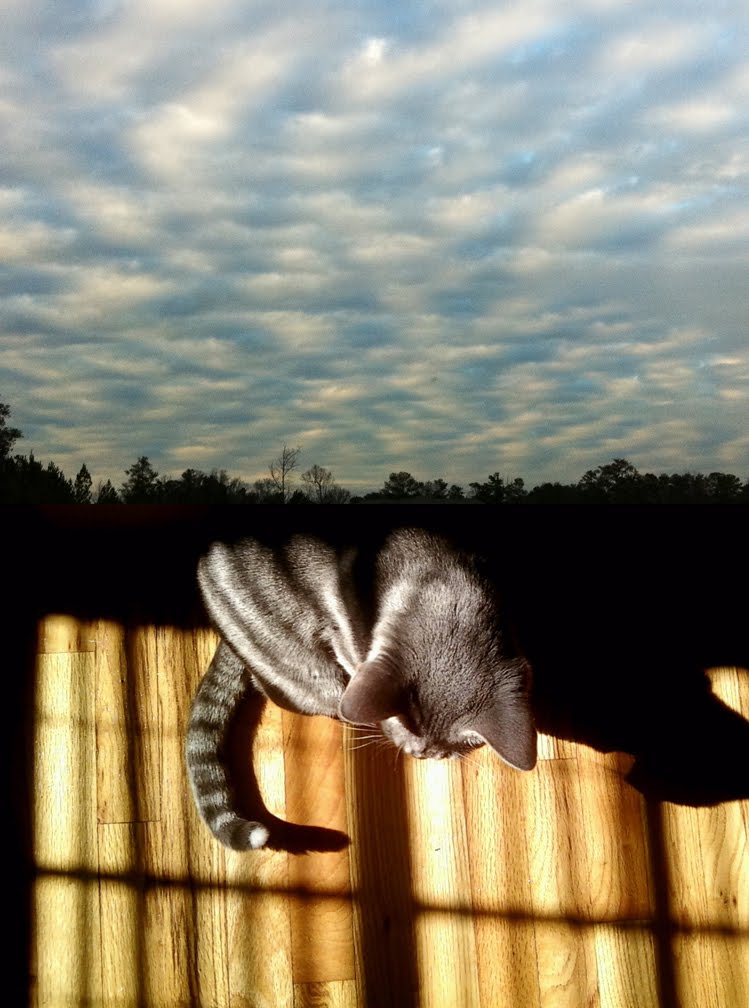 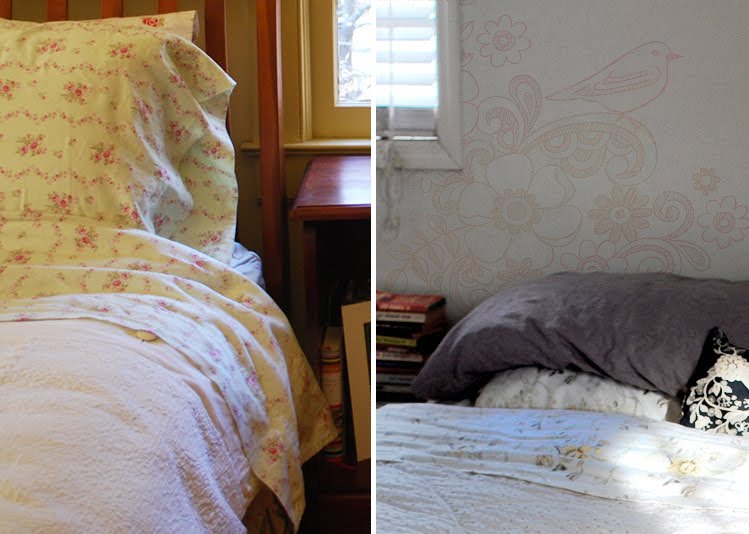 L - Nikon / T - Canon
"The February sunshine steeps your boughs and tints the buds and swells the leaves within."
- William C. Bryant
p.s. flower overlay is added to photo - not wall.
Posted by spread your wings at 8:47 PM 8 comments:

Get this widget at roytanck.com

Please don't borrow or use our images without our permission. Thank you.

spread your wings
Atlanta/Athens, Georgia
This is a mother/daughter photo blog. A way of keeping in touch while the young woman spreads her wings and is feeling her freedom away at college and the mother embraces the new freedom that she now has. The photos we share each day will be spontaneous, catching a glimpse into each other's new world. We'll share a few thoughts in addition to photos. This is a new experience for us which I hope will enable our bond to grow and strengthen as we go along.