by the sun / by the moon 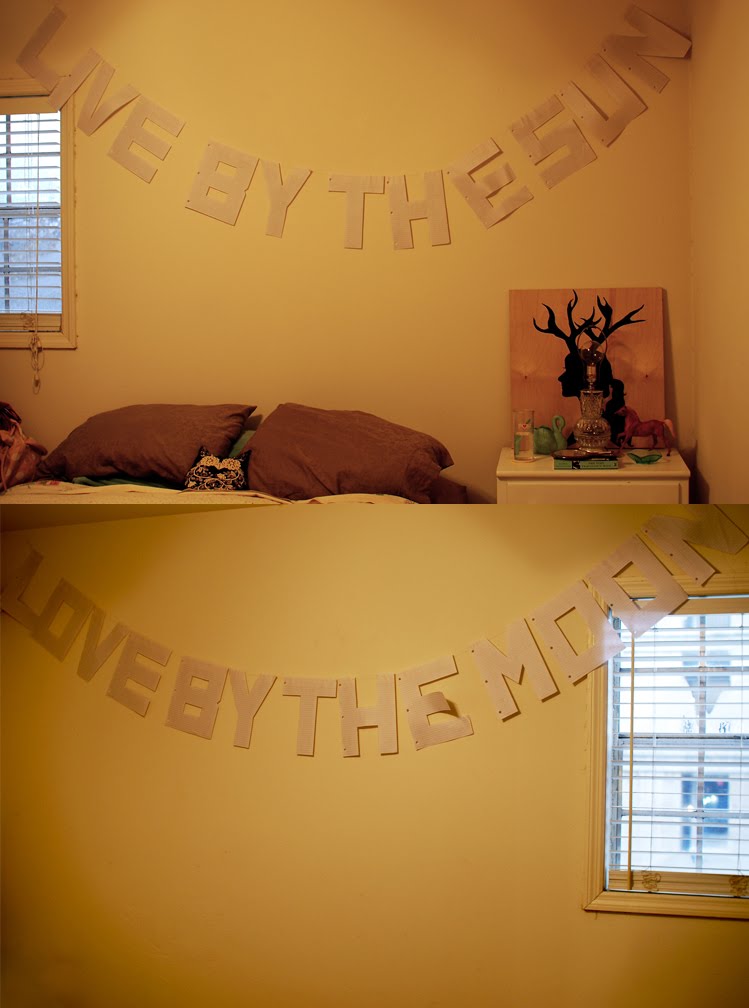 T- Nikon
We were prepared and ready to watch the lunar eclipse last night. Going to bed a little earlier and setting our alarm to get up and watch. But here in Atlanta the skies were cloudy and we couldn't see this first and only eclipse of 2010. It was a disappointment. But maybe some of you saw this wondrous site that fell on the early morning hours of our winter solstice - watched as the bright white glow of the moon gave way to a coppery, luminescent orange.
Celebrate Winter!
Banners hand made by Taylor on a cold winter night out of notebook paper.
Posted by spread your wings at 5:24 PM 10 comments: 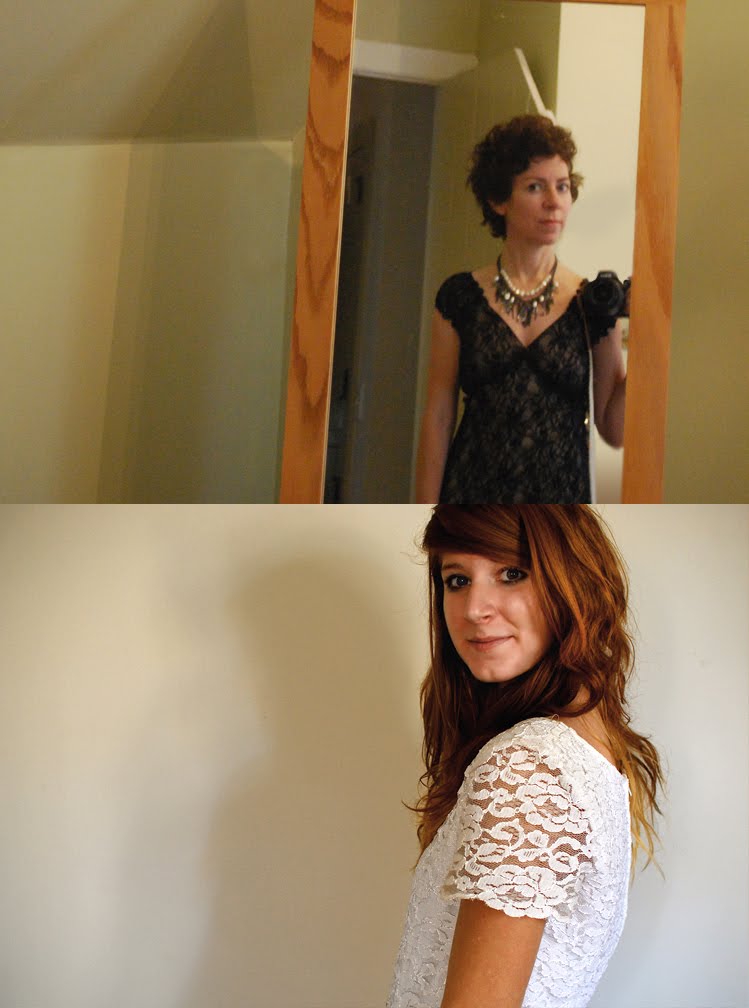 L - Nikon / T - Nikon
I don't "dress up" much - the office Christmas party is about the only evening I buy a special dress, get out eye shadow, stockings, and my patent leather shoes. And because Taylor wasn't home to critic my outfit I had to take a photo and send it to her for approval. (wish i could take better self portraits) She said, "it looks cute, especially with the awesome necklace and shoes". I'm not sure cute was what I was going for but I guess it will do. Do you like to get dressed up in fancy clothes? / people always tell me i look too dressed up for the errands i'm running. i just like wearing pretty things and am too impatient to wait around for the perfect event. i've gotten very good at dressing nice things down with thrift store belts and worn boots, haha. i hope i didn't make too much of a faux-pas by wearing white this winter day.
Posted by spread your wings at 9:19 AM 7 comments: 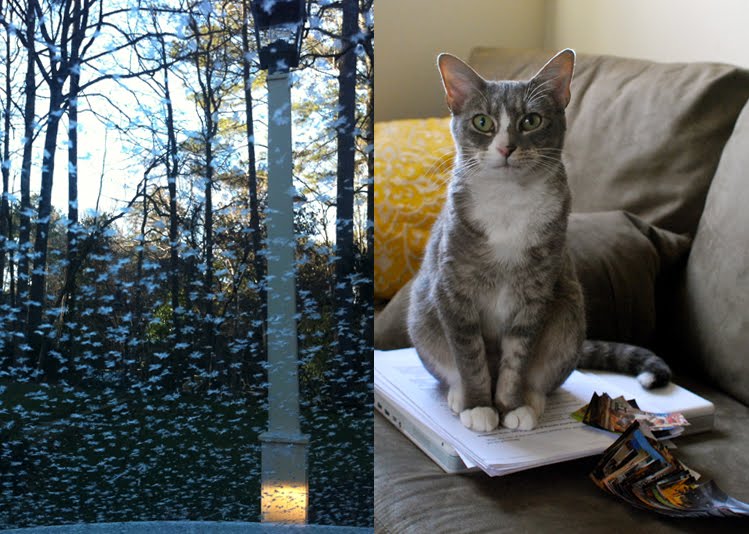 L - iphone / T - Nikon
This past week was crazy busy - two very late nights at work - working til midnight. But Wednesday night was especially bad. Not only were we having to work late but the weather was bad. We were hearing stories of how dangerous the roads were getting due to dropping temperatures on top of an earlier rain - the roadways were covered with black ice. So many accidents that the police had reported they would not respond unless there were injuries. But we stayed - we had to get the work done. When I went out after midnight to get in my car it was frozen solid and I couldn't get in no matter how I tried. My dad had to come pick me up. But I sure am thankful - I'm in my 50s and my dad is still watching out after me. There were a lot of stories the next day about the problems people had getting home - ending up in ditches and curbs; abandoned cars; having to ride marta; 2 hour drives; many detours, etc but at least everyone arrived safely. I like the winter but sometimes the weather can bring dangerous conditions. I hope you will all be safe out there this season. / "really, bunny? i go away for ten minutes to make coffee and you've already assumed your typical inconvenient position on top of whatever i'm doing? you look so proud of yourself too.." my finals are finally over and i'm so relieved. athens is so odd, but very peaceful, with everyone gone for the holidays. most people have skipped town the second their exams are over, but i'm taking some time to myself to get some christmas shopping finished and read at the very not-crowded coffee shops. but i won't lie- i'm excited to come home for the holidays.
Posted by spread your wings at 8:35 PM 4 comments: 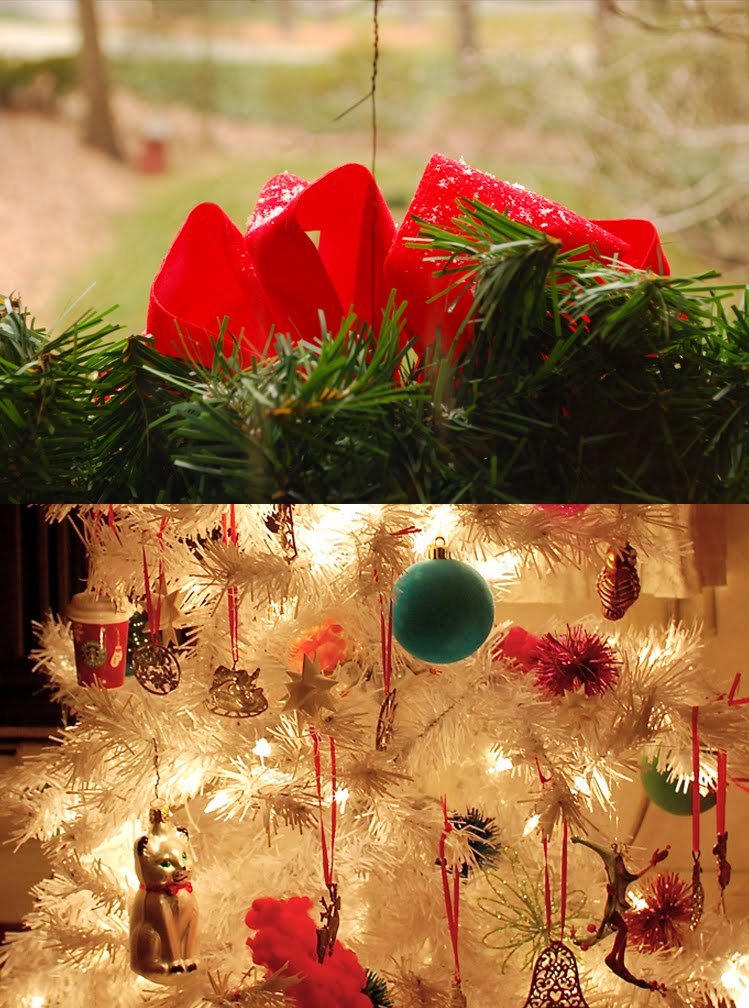 L - Nikon / T - Nikon
I hope you will not think me unkind for not visiting. I promise to stop by soon. I sure have missed you all. / it's fun, each year, pulling out the ornaments one by one - remembering. dad gives me a new silver "hand and hammer" ornament each year and my oma gives me one each thanksgiving - something representing my interest that year.
Posted by spread your wings at 8:49 PM 6 comments: 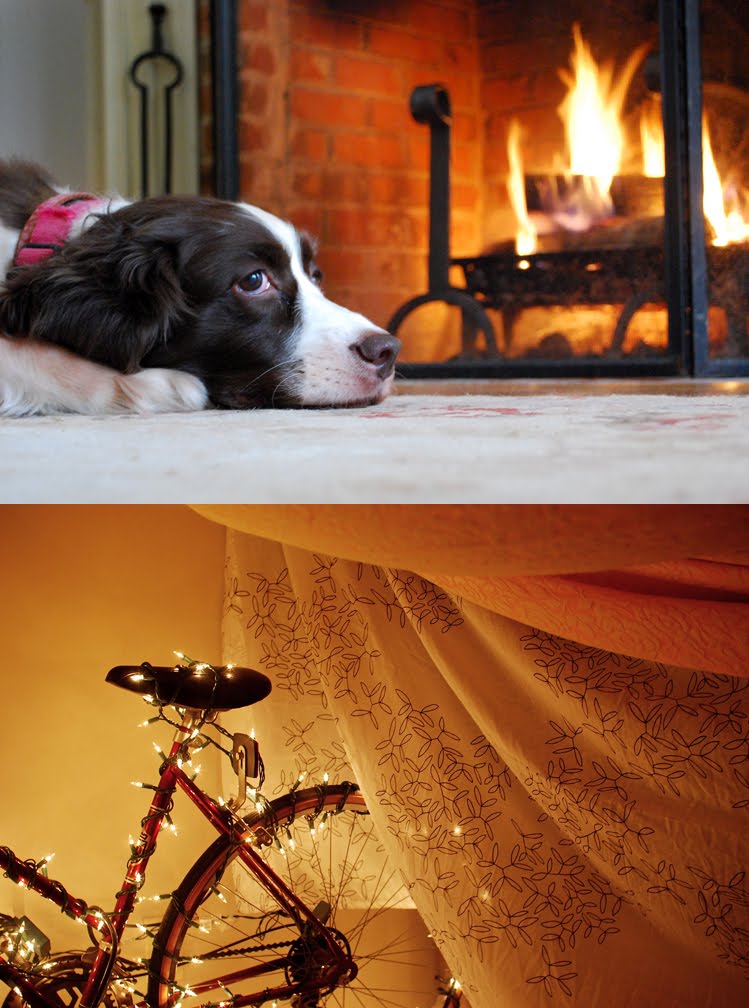 L - Nikon / T - Nikon
As I drove to work this morning it looked like glitter swirling about in the air - it snowed as the sun tried to peek through the clouds. It's cold here in the south - cold enough to turn the water off for fear of frozen pipes. Did you get snow this weekend? /i felt like a child again building forts with blankets and furniture - i created a cozy little hide-away for studying in. finals are this week . if only the snow had stuck it might have given me an extra day to study.
Posted by spread your wings at 6:38 PM 2 comments: 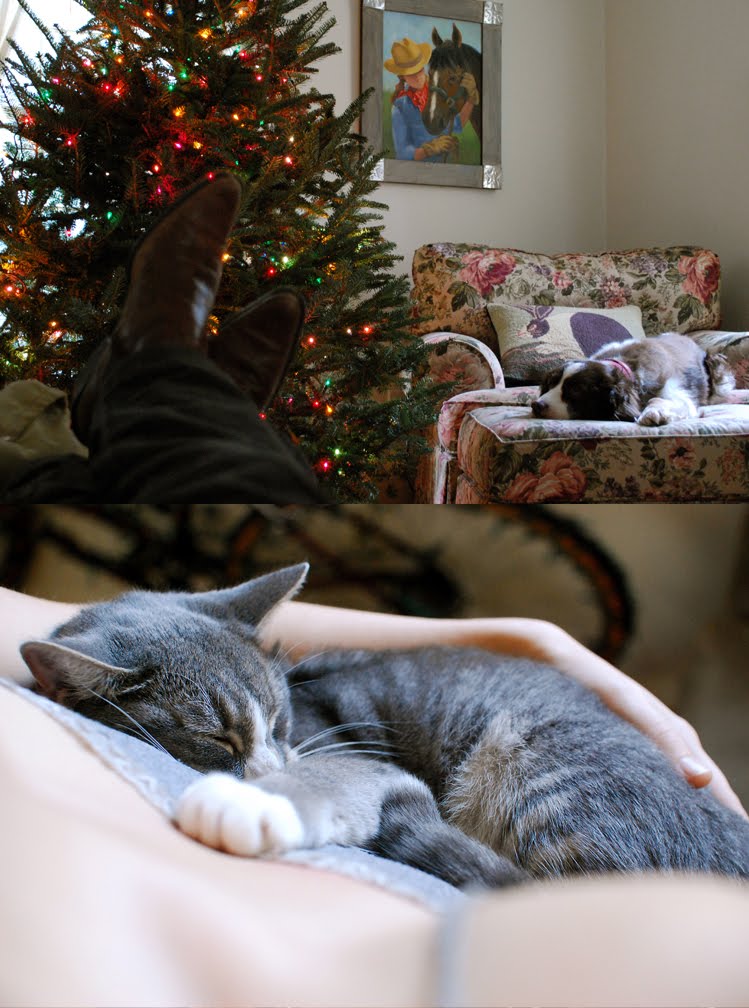 L - Nikon / T - Nikon
I still haven't gotten my tree decorated. I've had orders to fill - making rings and things late into the evening. Guess I should have decorated the tree instead of taking that little nap. But oh how nice it was - the only sound was the fire crackling and the dog snoring.
In the middle of all the busy preparations for the holidays, I hope you are able to find a moment of calm and rest.
Posted by spread your wings at 6:33 PM 6 comments: 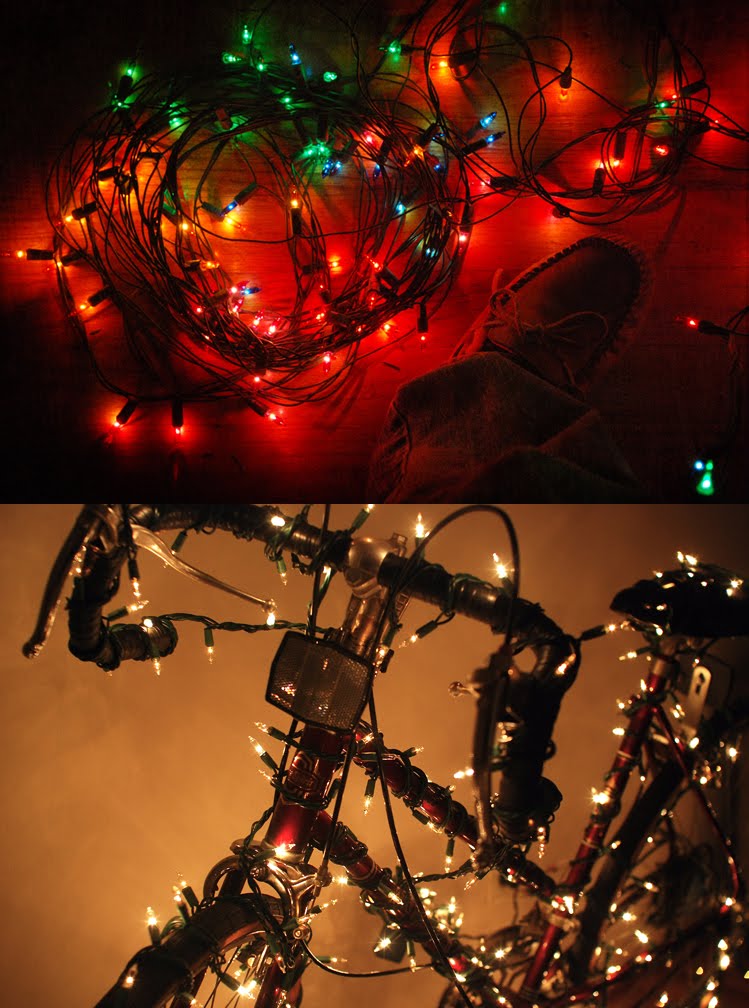 L - Nikon / T - Nikon
I'm behind on getting my tree up this year - I just got the lights on it last night. However, it looks like Taylor is very festive at her apartment. She has her little tree decorated and her bike is all decked out for the holidays too. I'm wondering... do you use colored lights or white lights?
Posted by spread your wings at 9:00 PM 8 comments:

Get this widget at roytanck.com

Please don't borrow or use our images without our permission. Thank you.

spread your wings
Atlanta/Athens, Georgia
This is a mother/daughter photo blog. A way of keeping in touch while the young woman spreads her wings and is feeling her freedom away at college and the mother embraces the new freedom that she now has. The photos we share each day will be spontaneous, catching a glimpse into each other's new world. We'll share a few thoughts in addition to photos. This is a new experience for us which I hope will enable our bond to grow and strengthen as we go along.